Everyone’s got a secret wish in Little Pondale this summer.

Mia’s been exceptionally lucky since moving to Lily Pond Lane. But even on her honeymoon with the man of her dreams, she still has one remaining wish.

Ella wishes Gill would propose. But since Mia’s wedding something’s changed in their relationship. Now he’s spending time with newcomer, Tabbie Talbaine, Ella wishes Tabbie will leave as quickly as she arrived.

Tabbie wishes she hadn’t driven her car into a pond. But it could be the best thing that’s ever happened to her. When she discovers Hollywood heartthrob, Justin Lake’s staying in the village, getting an interview for her popular blog isn’t her only wish.

Bree was told she couldn't have a baby. Now she’s expecting twins and is simply wishing it all goes well.

And as for Hettie ... she wishes she could get her hands on an old map of the village. Because there’s something hidden in Little Pondale that Hettie Turner really wants to find. 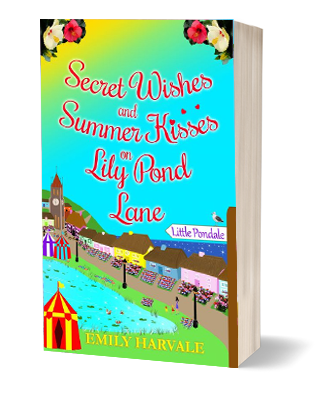 Barchenbear
Reader review
Absolutely brilliant
"It’s so sad that this is the final book in the series, I have absolutely loved visiting lily pond lane, Emily has a wonderful way of bringing all the characters to life. I can’t wait now for the next book."
rhona
Reader review
Brilliant finally to the series sad it's the last one
"This has been such a brilliant series sad it's ending have loved every book and been unable to put it down. Hoping for revisit in future though."
JR59
Reader review
Feel good read
"Just loved all the Lily Pond Lane books, didn’t want them to end. Characters were great. Would highly recommend this series of books. Feel good reading."