Willa Daventry knows what she wants. She's thirty-two, single and determined to make her singles sailing holidays a successful part of her family's travel business.

She doesn't usually mix business with pleasure but the attentions of three handsome men under the blazing Greek sun are enough to turn any girl’s head. Should she keep things professional, or risk a little flirting and get what she wants into the bargain?

Unbeknown to Willa, the three men make a drunken wager to see which of them can get a date with her. Aristaios and Harry don't play fair but Mark is determined to win. He'll have to keep sex-mad pilates instructor, Blossom Appleyard and divorcée, Suki Thane at bay though, if he is to stand a chance of sailing off into the sunset with Willa.

When Willa learns of the bet will she decide to play the men at their own game and teach them a lesson they won’t forget, or... will she just feel she’s better off sailing solo? 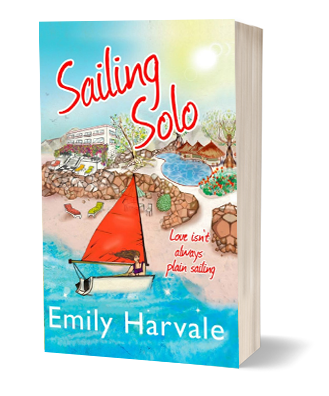 Julie Hall
Reader review
Excellent
"What an excellent story. I just couldn't put it down. Wonderful characters and a perfect ending. Emily Harvale is a brilliant storyteller."
Mummy Dearest
Reader review
Sailing Solo
"I absolutely loved this book. A great story from Emily Harvale yet again. The characters are all so likeable. The story is set in a beautiful country and puts you in the mood for an exotic holiday. Another great read from this talented author. I look forward to reading more from Emily Harvale."
Gerald Bennett
Reader review
Really good storyline
"As always with Emily's books, I can't stop reading it."