Christmas is a time for family and friends, miracles and magic, falling snow and roaring fires, fun, laughter and festive feasts. In Snowflake Cove, it’s also a time for secrets to be revealed…

Evie Starr is hoping for more than a sprinkling of magic this Christmas. The family-run Snowflake Inn is virtually empty and the Starr’s financial future isn’t looking bright. But Evie’s gran, Jessie has a secret that might help.

Enigmatic, Zachary Thorn is every woman’s dream. He’s also ex-SAS, so his secrets are classified. The Christmas Special of his feel-good, TV show is set in Michaelmas Bay – until a phone call means he’s spending Christmas in nearby Snowflake Cove.

Evie’s best friend, Juniper thinks boyfriend Darren has a secret. Evie knows he does. And Evie’s niece, Raven is hiding feelings for Juniper’s brother – who has a secret crush of his own. But the biggest secret in Snowflake Cove is the identity of Raven’s dad.

With snow falling thick and fast and secrets being revealed one after another, will everyone be snuggling up by the fire on Christmas Eve, or are some secrets best kept hidden...? 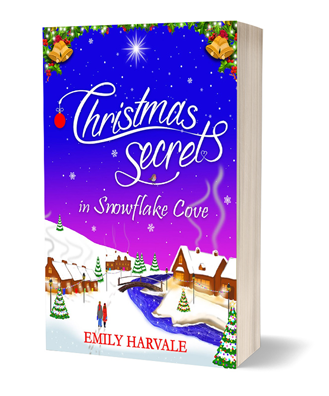 Maria Brennan
Reader review
Couldn’t put it down, can’t wait for the next book
"Loved this book, the twists and turns of this story kept me spellbound until the end. Couldn’t put it down, so a very late night. Memo to self, don’t start Emily’s books until house work is done. Can’t wait for the next book in this magical new series."
Sheila Smith
Reader review
Excellent
"This was a very enjoyable read and definitely five stars. Glad I found Emily Harvale and am now reading other books by her."
rossco
Reader review
Amazing
"It’s amazing that, I a proper bloke who loves murder mysteries, spy novels and the like would not only read a love story but give it 5 stars. I loved it although the ending was obvious from an early stage. I was so relaxed as I read it almost without putting it down. I would recommend this book to anyone who has a heart for people as love is in every page. I’m a convert to this author."