After a frosty welcome, things soon heat up at Wynter House.

Neva Grey is looking forward to spending a quiet Christmas with her family in the cosy cottage they’ve rented in the picture-postcard village of Wyntersleap. Nestled between rolling hills and a gently burbling river, it’s going to be idyllic.

Except it’s not. Torrential rain causes the river to burst its banks and the quaint little village isn’t quite so cosy with water lapping at the doors. Add to that a power cut and a sudden blizzard and Christmas is looking bleak ... until gorgeous Adam Wynter invites them all to Wynter House.

Although not everyone is happy to share the ancestral home. Adam’s elder brother, Rafe is less than pleased. Their grandmother, Olivia extends a grudging welcome. And for Carruthers, the oddly arrogant butler, unexpected guests are a Christmas surprise he could do without. Especially one as troublesome as Neva’s eight-year-old niece.

But something’s not quite right at Wynter House. What is Rafe intent on hiding behind the locked doors of the old barn? And what really happened to his first wife? It’s a good thing Neva has a sense of humour. She’s going to need it this Christmas at Wynter House 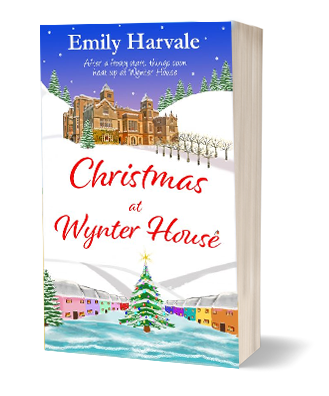 Deborah Hester
Reader review
Another mind capturing novel by Emily Harvale
"Another fantastic and captivating novel, I couldn't put it down and read the entire book in just a couple of days. Reading it I felt I had walked into the book and watched the events unfold before my eyes. Cannot wait for the rest of the series."
Mrs Sara Harris
Reader review
Another Emily classic!!
"I simply love all of Emily's books - we all want our own men to be just like those in the novels - they seldom are but it doesn't matter because they're there in the books!! I've loved every single one of her books & am already looking forward to the next!"
SueS
Reader review
Another brilliant story
"Another absolutely brilliant book from this wonderful author. Can’t wait for the rest of the series. Every one of her books picks you up and takes you on a fantastic journey leaving you wishing you could live wherever the story is and be friends with the characters that seem so real. Thanks again."