Should she choose love past, present or possibly, future?

Carole Singer hates her name, especially around Christmas when everyone seems to think it's okay to make a joke about it. She can't wait to marry her boyfriend Dominic and change her surname to 'Smith,' and she's sure he'll pop the question any day now.

When her gran has a nasty fall, Carole has to return to the Sussex village of Jutsdown, to care for her - and that's sixty miles from London ... and Dominic. It also means coming face to face with Sebastian, the man who broke her heart ten years earlier.

As Carole juggles her career as an illustrator, caring for her meddlesome gran, and missing Dominic, she struggles with her rekindled feelings for Sebastian. Getting roped in to help with the Christmas musical, A Christmas Carol, at the village hall and discovering her gran has invested in a garden centre owned by the moody but gorgeous, Nick, doesn't help. Carole's Christmas now looks as if it'll be anything but peaceful.

With the Christmas holidays looming and Dominic coming to stay, Carole is facing a dilemma. Should she choose her past boyfriend, Sebastian, her present boyfriend, Dominic or could there be any sort of a future with the dark and secretive Nick? 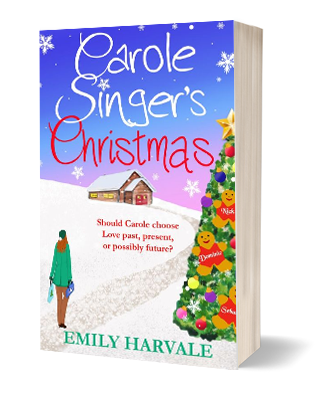 India
Reader review
Heart Warming Romance with a Festive Touch
"This book, with its gorgeous cover, ticked all those boxes. Set in the Sussex village of Jutsdown, the story centres around Carole and her rather less-than-straightforward love life. It's not just about romance though, it's about relationships with family and friends too. Carole's gran, Mitsy, in particular, is a great character and her best friend is a hoot. Easy to read, I romped through it in a couple of sittings, a smile on my face all the way."
A.E. Clark
Reader review
Unputdownable
"I only recently discovered Emily Harvale & am so glad I did !! Her books have the real 'feel good' factor and her characters are great, particularly Nick in this book. He's a man with old fashioned values and, although at times you wish he'd open his eyes to what's really going on between him and Carole, it just makes the story even more Unputdownable. Can't wait to get the next book, blow the housework, it can wait !!!!!"
Michele
Reader review
Carole Singer's Christmas
"I absolutely loved this book found it very hard to put down and certainly puts you in the mood for Christmas. Such a lovely story line, Emily Harvale certainly has a wonderful way of keeping you on your toes and making it very loveable and warming to read."