Help! Too many ideas

Plot ideas are usually welcomed by novelists, with keyboard-tapping glee - but what happens when we have too many at once?
I have a picture on the wall near my desk, of Hans Christian Andersen. It's one I've had since I was very young and I used to love it. All those images dancing before his eyes. Simply magical. Recently though, it has acquired an almost sinister, aura. And I'll tell you why. 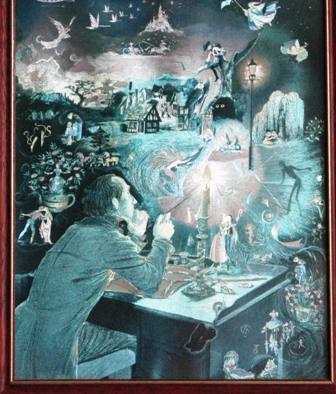 My second novel was completed last October and I started getting ideas for my third, almost immediately. I wrote down the names of some of the characters and the barest bones of the plot then I began writing. A few weeks later, another idea popped into my head, so I did the same with that. I was now going to write two at once. This wasn't the first time this had happened to me, so I wasn't overly concerned but then, just days before Christmas, a third idea started dancing in my head! This was a problem; two I could manage but three ...
Unsure, at first, whether this third one was another novel or merely alcohol induced, delirium (it was the festive season; I was getting into the spirit of it) I bit into my fourth mincepie and wrote down the characters' names and the bare bones of novel number three.
Panic set in. I was being asked, by people who had enjoyed my first two books, when my next one would be out, and whilst it was thrilling to know that there were readers out there, waiting for another novel from me, it was rather worrying to realise that, unless I concentrated on one, the answer may be - a long time in the future!
I mentioned this, in passing, on facebook and a few people offered to read the rough outlines of all three and tell me which they preferred. That seemed like a good way to solve my dilemma and Christmas came and went, with me feeling very happy and relaxed. Until New Year's Eve ...
Out of the blue, while I was doing something totally unrelated to writing - no! Not that. Please behave yourselves! - a fourth story, started a slide show in my head! I couldn't believe it. This was getting silly. Nevertheless, I wrote down what I was seeing and hoped it would stay on "pause" for a few months.
So, here I am, at the dawn of 2013 with the bare bones, character names, locations and working titles of four novels. I even have rough drawings of what I want the covers to look like! Utter madness, I know.
Which one will force its way to the fore and become novel number three? Your guess is as good as mine. I just hope that one of them will. In the meantime, I think I'll hang a cover over the picture of Hans Christian Andersen. It is beginning to make me feel a little paranoid!

I wish you all, a very Happy New Year. I hope 2013 brings you good health, increasing wealth and never ending happiness - and for the writers amongst you - lots of wonderful ideas, but only one at a time!

« Back
Tweet
More in this category: « I have been adopted! Merry Christmas »
back to top